If you’re looking for somewhere to dispose of your baby’s diapers at home, then you should look into getting a pail (read my post here https://makemeupmandy.com/best-diaper-pail/). Apart from being a stink-proof way of disposing diapers, using one also gives you a place to throw used diapers that’s not with the rest of your trash.

While different kinds of pails have different features (these pails are best for cloth diapers), they are generally composed of a pail, a disposable bag, and a mechanism to keep it sealed, effectively keeping the stink locked in. Not only are they relatively cheap, they’re pretty handy to have around the house too. 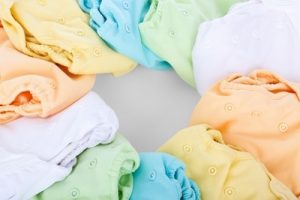 How to Dispose Diapers?

If you don’t want to use a pail, then that’s fine too. Just make sure to follow these steps for a stink-less way of disposing diapers:

Make sure to wrap up the diaper up as tightly as possible to keep the smells and other icky contents contained. Good thing diapers have sticky tape pats that you can use for this purpose.

After that, dispose the diaper in a sealed trash can. This will help keep the smells to a minimum.

Disposing diapers while on the go with your baby can be surprisingly hard. For instance, you’re on a plane and your baby’s diaper gets full. What are you going to do? Well, you can wrap the diaper up in the puke bag and ask the stewardess to throw it for you. However, you must take note that they’re not allowed to handle used nappies before or during they’re handling food so keep it safe until they can help you out with it.

If you’re out on a walk with baby, don’t just throw the diaper wherever you may please because it’s convenient!

Not only is it bad for the environment, it’s also just plain wrong to litter. Keep the baby nappy in a sealed bag and throw them once you find a trash bin.

A surprising solution is sealing used baby diaper in a doggie poop bag. Not only do they have a similar area of expertise, but doggie poop bags can be a good place to store diapers until you can throw the diapers in the right place. They can be conveniently stored in your diaper bag and can be bought at most pet stores.

This should go without saying, but let’s just get this out of the way. Remember to wash your hands after handling your baby used overnight diapers.

Your baby’s immune system is still vulnerable so you shouldn’t expose him or her to bacteria from handling diapers. Don’t just wash your hands, sanitize them as well.

How about Disposing Diapers On A Plane?

This would be, of course, significantly more challenging! Try to put your baby’s soiled diaper in a plastic bag and seal it. Or even better, make use of the airplane’s sick bag. Just bear in mind that you should not hand your baby’s soiled diaper as rubbish for the air stewards to dispose. This is because as per FDA rules, they are not allowed to handle it as they also handle food.

Written By
Sherry
More from Sherry
If you are planning your nursery for your baby, you might want...
Read More